At the park today, Nathan picked up and brought home a rock he found. He doesn't usually do this with stuff he finds. He tends to leave it behind as though it "belongs" to the park.

This made me wonder if he would collect rocks as he grows up.

I was also then reminded of a plot line in a movie where the main character collected rocks he finds during significant moments in his life and carries then with him at all times.

For the life of me, though, I could not remember the movie or the actor.

Since most friends would tell me to "Google that shit," I did. However, "movie with a man who collects rocks from significant moments in life" didn't really turn up much that was useful.

How do you look that stuff up?

Thankfully, it finally came to me both the movie title and actor. Anyone want to venture a guess? I'll give you guys a few days to think about it.

Mar 20
If Dave2 is going first, I'll go second. Well, second insofar as I've seen my own reading list go. Maybe some others of his readers have done, but I haven't seen them. It's Dave2's Burger Quiz! What kind of burger...
Next Post

Mar 22
"What's wrong?" she asked. "You haven't been yourself all day. In fact, you've been a little off all week." "Nothing's wrong," he said in reply. "Would you tell me if there was? I mean, would you be completely honest no... 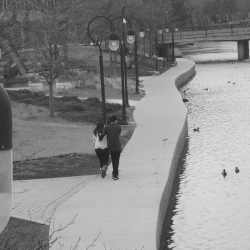 No idea. Tried searching for the movie via Google and funny enough, your post popped up in my search. :)

That didn't take long. What were your search terms?

That's a boy thing. I loved collecting rocks. As for the movie, I tried the Google thing and found "Badlands" from 1973.

Not the movie I was thinking.

Got me stumped. And I've been trying to picture that in my head from the movies I've seen.