I was awaiting permission to announce this, but, as of last Wednesday really early in the flippin' morning, Katie and I became aunt and uncle to a new niece!

That's E being held by Z, my other niece on that side.

She's a cutie. And she already likes me. When I held her, she stopped crying. Who's got the touch? I gots the touch!

I told my brother I wouldn't share her name for privacy's sake. Not that it won't likely come out at some point in the future, but still. I've seen enough parents call their kids by initials on the Intarwebs that I wonder if we should've done that with Nath... er, "N"... from the beginning.

Apr 8
Poor Nathan and Katie. On Thursday, all three of us were under the weather. Today, Katie was well enough to return to work but Nathan couldn't go to daycare so he and I stayed home. That little dude just wasn't... 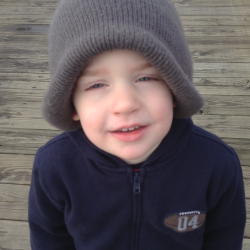 Apr 10
I've seen people push for this on the web and social media in the past, but they never push hard enough. So I'm going to try one more time... Consider the way your TV is turned or the way a...

So so so cute! Congratulations!!

I thank you on their behalf.