Rick Tyler (ind) is running for U.S. Congress in the 3rd Congressional District of Tennessee. He's an underdog. He lost in his previous bid. But he's a family man. A business owner. He looks like the typical guy next door.

Except that he's a raging freakin' racist.

He had billboards installed with Rockwell-esque family images accompanying big (ironically) black words that read "Make America White Again." I refuse to repost the image. Absolutely refuse. You can view it yourself at the WashingtonPost.com.

What degree of "Ignorant Dumbass Hick" do you have to be to think that something like this is okay to do? Ever.

People wonder why I have such little faith in our political system... here you go! We allow dipshits like this to run for office. And people actually support them! This bumblefuck will get votes. Actual, real votes from actual, real people.

But even more perturbing to me is that others within his campaign also thought it was a good idea and greenlit it. And someone else thought it was a good idea to design it. And another to print it. Yet another to post it. And God only knows how many more to drive it by it before someone with a brain in their head finally called to complain about it.

And God bless that complainer.

Why do people act in this manner and think it's a good thing? How can they claim to be doing it in the name of God or Allah or Buddha or anyone of the ilk? Whoever is our Lord and master created us... all of us... if they didn't mean to create someone, I doubt they would have done it or kept doing it. We are all equal.

For those who don't think so... just fuck right off, okay? 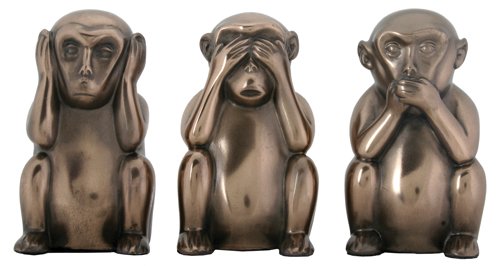 I need those statues for my desk at work.

Ahhhhhhhhhhhhhhhhhh Tennessee. The land of the bible belt and super racist. Why does this not surprise me at all?

Shouldn't surprise me and yet it does.