I can't believe it's already time to revisit Kevin's 7. Where did the year go?

I also can't believe that in preparing my lists for this year, I decided to add a new list -- Podcasts -- and completely forgot to prep one that I've done every year since doing year-in-review lists. So, while my schedule for Kevin's 7 was going to be every Friday from today through the end of the month, you will see one week where I have a second list. Gotta get TV in there somewhere.

Podcasts have become such an integral part of my day-to-day existence with my commute to and from work. I listen to them more than I listen to music. So it makes sense to share what I would consider to be my favorites. If you're not listening to them already, give them a shot. They're FREE! Can't get any better than that.

7. Revisionist History
I read Malcolm Gladwell's Outliers a handful of years ago and, unlike so many other people, I just didn't care for it. I appreciated what he was trying to do, but felt that the overly repetitive presentation of his material just killed my interest level. So why would I listen to a podcast hosted by him? Well, he's got a great voice and, as it turns out, a lot of what I didn't like about his presentation style in print really works well in podcast format. The first season of this show is a 10-episode series highlighting events in history with which you may not be at all familiar that deserve to be reinterpreted or given a second look for one reason or another. I can't wait for season two. Not sure when that starts.

6. Up and Vanished & In the Dark (TIE)
I hate that I had to give a tie to two podcasts, but I think you'll understand why.

Up and Vanished is the investigation into the 2005 disappearance of Tara Grinstead of Georgia. Each week, host Payne Lindsey details his own research into the cold case. He's a documentary filmmaker and was planning to simply use this podcast to provide a bit more insight into the making of this documentary. But I think the podcast has taken on a life all its own to which the film will play second fiddle. This podcast is still going.

In the Dark was supposed to be a cold case investigation into the 1989 kidnapping of 11-year-old Jacob Wetterling of Minnesota. His name may sound familiar because such a national fervor was made of his kidnapping that it resulted in the creation of a national sex offender registry. The plan with the podcast was for host Madeleine Baran and researchers from APM Reports to develop their own theory as to what happened. However, just weeks before the first podcast aired, Danny Heinrich came forward and confessed to the crime throwing the podcast on its heels. What it becomes is an investigation into what went wrong with the investigation and what signs existed from day one that point to Heinrich as the culprit. This podcast is done, but is still worth the listen.

5. Criminal
I've been listening to Criminal for a couple years now and really enjoy it. I found it in my post-Serial quest for more podcasts about mysteries and crime and the like. Unlike Serial, Criminal focuses on a different story each week and not all are crimes but they do have a law-and-order element to them. My favorite recent episode was about a woman whose identity, along with those of her parents, was stolen decades ago when she was only 11 years old. She is still trying to recover from the damage done by these thieves. Or, as she found out only recently, "thief," singular. It turns out... Oh you're just going to have to listen to it on your own (Episode 51: "Money Tree").

4. Song Exploder
Talk about playing to the geek in me. Hrishikesh Hirway produces this podcast "where musicians take apart their songs, and piece by piece, tell the story of how they were made." Sorry to just quote the website, but it's explained so perfectly, why try to improve upon it? And this podcast is really that simple. A musician is interviewed about their music and then takes one song and explains its development from day 1, piece by laborious piece. It's so much fun to hear especially when an element of a song is focused upon that you may never have heard before. After listening to this podcast, you'll never listen to music the same way again.

3. Podquiz
I have been listening to this weekly trivia podcast since episode 14 when I first discovered it. Katie started listening with me at around episode 200. Today, James Carter's venerated and long-lived podcast hit episode #612. That's impressive. You do the math. But Podquiz gives you 20 questions each week broken into four five-question themed segments. There is always a music round, which can be accompanied with Quickfire, Famous Voices, Pot Luck, Movie Trailers, and so many more. He's always willing to try something new. Every 10th round includes a bonus prize round of five questions to which you email him the answers. Two weeks later, he picks winners to receive a T-shirt or button. 598 weeks deep and I still haven't won. Dammit, James.

2. Presidential
Beginning back in January, Lillian Cunningham of the Washington Post began a 44-week journey in which aspects of the reign of each of our nation's Presidents, starting at George Washington and running up through Barack Obama, is examined. Historians and museum curators and authors and journalists are all interviewed for these 30-45 minute podcasts and provide great background information. Lillian is a great host and I can't wait to see what she and WaPo come up with next. Yes, the response was that great that they're going to do another podcast series. They just don't know what. Anyway, this series is complete, but they're timeless so give them a listen.

1. Lore
Lore has been my go-to podcast since I was introduced to it by one of Katie's cousins and his wife at a memorial service for their grandfather. Yes, we were talking about podcasts at a memorial service. Call it "familial bonding." Anyway, host Aaron Mahnke exhaustively researches folkloric tales and legends and unexplained phenomena to bring us some of the most interesting and insightful storytelling that you could ever get for free. Heck, it's better than most paid-for content out there. It's so good, it's becoming an anthology series on Amazon Prime this coming year. 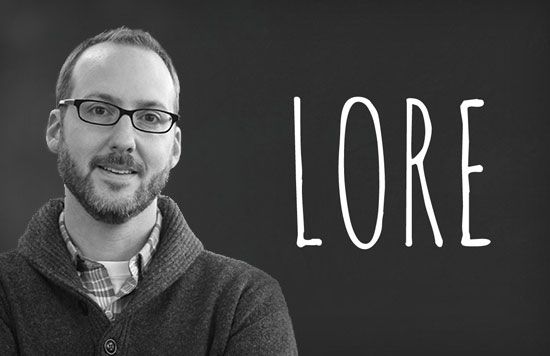 Image courtesy of Nerd for a Living podcast]

Is that as in "Woah, that's incredible!" or "Woah! What a load of crap you're full of, Kapgar!"

Woah as in did not see that coming!

With the exception of Podquiz, I've not heard of any of these. Time to do some exploring. And time to get back into my own to see if it makes your end of year 2017 list.

I cannot wait for the Banal Comeback. You need co-hosts. That'll keep you on track.