I think I might run with that idea, but just not with modern superhero films. There are too many of them and I've seen barely half, if even that many. Just way too ambitious for me.

I am going to use the ranking system, instead, with Star Wars films and TV shows. I'm also going to go so far as to break down TV shows by individual season. The reason for this is because some TV shows change showrunners or writers midstream which can affect the presentation of a show. When this happens, what was a great show may suck afterward (or vice versa) and you don't necessarily want to see one great season bogged down by a lackluster one. Also... my blog, my rules.

The reason I'm doing this now is because I saw Rogue One: A Star Wars Story for a second time the other night and I feel I am now better able to assess its finer virtues.

1. Ep. V: The Empire Strikes Back - A++++
I don't see how this could ever change. Been this way my entire life. Although I do wonder if the same storyline were to drop in this day and age, would it have held up so well? The reveals were really mind-blowing at the time. Now? I'm not so sure. It will be interesting to see how Nathan responds to this movie.

3. Rogue One: A Star Wars Story - A
I almost could have put this up higher, but couldn't bring myself to actually pull the trigger. It's the only Star Wars movie that doesn't revolve directly around Jedi and the Force although both are still felt or observed. Also, even though the characters are rather throwaway given the circumstances of their story, I still really love them. Chirrut Imwe is a top five overall character for me.

4. Ep. VII: The Force Awakens - A-
Sure, it's basically the same thing as A New Hope, but A New Hope will always have done it better even though this one did a fantastic job of re-creating the excitement and bringing fans back into the fold.

5. Star Wars Rebels, season 2 - A-
Getting all the background on our favorite band of marauding rebels and having individually focused episodes instead of everything revolving around Ezra all the time was nice. "The Honorable Ones," which was a story all about Zeb and Agent Kallus stuck relying on each other for survival a la Enemy Mine, remains my favorite episode of this show ever. 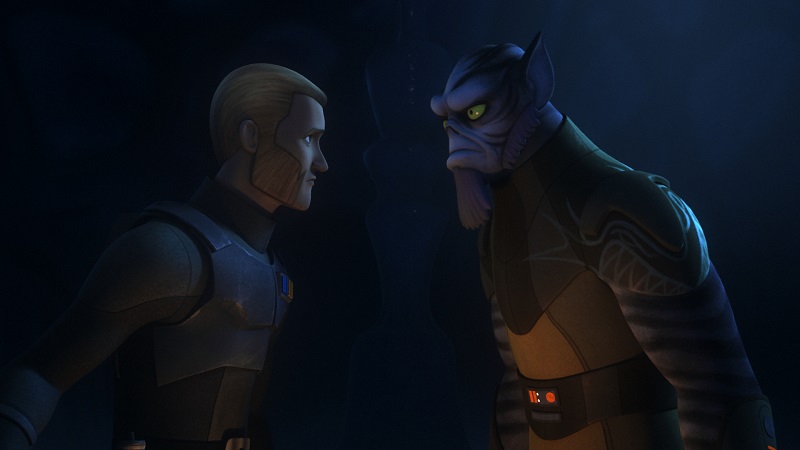 We are also introduced to Rex and his ragtag band of renegade former Clone Troopers. As a whole, the season took on a much darker tone setting the stage for the inevitable. And the season finale with Ahsoka Tano, Darth Maul, and Darth Vader? Spectacular.

6. Ep. II: Attack of the Clones - B
This movie used to fall just above The Phantom Menace, but as I've developed a greater appreciation of the prequel storyline, I think it does a much better job holding up to multiple viewings. I love the attempted assassination on Coruscant, the action on Geonosis and the discovery of the clone factory on Kamino. And Anakin's slaughter of the Tusken Raiders? Great stuff. It's much better than I used to give it credit for.

7. Ep. VI: The Return of the Jedi - B-
Sure, this was the apex of the original trilogy, but those damn Ewoks. I love Stormtroopers and refuse to believe that teddy bears can defeat them with sticks and stones. Thank you to ROTS, TFA, and R1 for making troopers more badass. This film is also responsible for ruining the image of Boba Fett and Lucas' re-edit ruined the ending by swapping in Hayden Christensen for Sebastian Shaw.

8. Star Wars Rebels, season 3 (so far) - B-
While the tone is still nice and dark, I think that too much focus has been shifted back to Ezra who has become insufferable and, to a lesser extent, Kanan. The remaining characters like Hera, Sabine, Zeb, Rex, and even Chopper just feel shoe-horned in as an afterthought. That's sad because those characters are too important to overlook. I will admit, however, that the new Fulcrum reveal was AWESOME.

9. Ep. III: The Revenge of the Sith - C
This movie was more highly ranked before when I hated the prequel trilogy and felt that this was the most akin to the original trilogy in terms of necessary action. Yes, this is the movie where we see Anakin finally become Vader. We see the birth of Luke and Leia. We see the Jedi slaughtered. We see Obi-Wan go into hiding. We see the Death Star for the first time. But... it's just lacking so much. Now we are able to see, with no doubt whatsoever, how wooden the relationship is between Natalie Portman and Hayden Christensen. We discover how bad an actor Samuel L. Jackson can be and how terrible he is at choreographed fight scenes (worst lightsaber battle ever). Even Ewan MacGregor phoned it in. I will say, however, that the execution of Order 66 (pun intended) was second to none and, despite hating Chancellor Palpatine as a character, the perverse joy that Ian McDiarmid injects into his performance is sheer twisted awesomeness.

10. Star Wars Rebels, season 1 - C-
Sure, this season introduces us to the characters of Ezra, Kanan, Sabine, Hera, Zeb, and Chopper, but it also firmly established the show as nothing more than children's fare. If the second season hadn't so quickly reinvented itself, I would have stopped watching.

11. Ep. I: The Phantom Menace - D+
It pains me to rank this movie so low. It should be the introduction to this amazing universe of characters and stories. Instead, it's a mess of proto-political intrigue, stiff chromakey acting, and action/effects for the sake of action/effects that fans have responded to by creating a Machete Order with which to watch the saga of films that allows you to skip this one entirely. I will say, however, that if fans weren't expecting to see a science fiction action showcase, it might have done pretty well just in terms of universe building. We do need to see what created the rift that allowed the Empire to rise to power and forced the creation of the Rebel Alliance. It's absolutely necessary. Just maybe not in the way that George Lucas wrote it in this film. Plus, when you get ridiculous crap thrown in like Gungans/Jar Jar Binks and Battle Droids and Watto and Sebulba, it just becomes a farce. And this despite the fact that Darth Maul is nearly my favorite character in the saga (not his cartoon self), Ewan MacGregor was very good as Obi-Wan Kenobi, and no lightsaber fight will ever compare to the Duel of the Fates between Maul, Obi-Wan, and Qui-Gon Jinn (Liam Neeson).

How would you rank them all?

As a note, I have yet to see any season of Star Wars: The Clone Wars. I'd like to sometime soon, but that's seven seasons of commitment.

Jan 27
I saw a trailer the other day for a new NBC sitcom called Powerless. It stars Alan Tudyk as the coattail-riding cousin of Bruce Wayne trying to create and market products for a superhero-laden world that are, well, not so...
Next Post

Jan 29
I checked the date in my Fitbit a few hours ago and realized it was the 29th of the month and I hadn't given a second thought, let alone a first one, to completing my video goal for this month....

I have nothing but good things to say about your top five. My list was slightly different as you know. I'm not quite as enamored with Empire Strikes Back as _most_ good Star Wars fans are. Have never been able to put my finger on why that is. It just didn't grip me like some of the others. A New Hope does deserve Hero Worship and I watched it so many times as a kid I've lost count at this point.

You're a BLASPHEMER!!! (Just kidding)

Your list is almost identical to my ranking. Replace 6 with 9 and you have my ranking of the SW canon.

Like I said, I used to have those reversed. How long has it been since you watched them both?

I watch all 6 (now 8 going forward once Rogue One gets released on Blu-ray and digital) of the SW movies at least once a year, including EP II and EP III. The story tie in with Anakin/Vader to EP IV is what gives me that edge on how the movie flows.

Empire Strikes back gets watched on average, 3 times a year. And I've seen TFA 10+ times since I bought it on Blu-ray and digital.

You win! I barely watch the saga one time each every five years. I need nathan to get into it. The tie in to ANH was not enough to make me forgive the horrid acting by Christensen, Portman, and Jackson. Horrendous.