Yesterday, when I said I had no idea why I signed up for Snapchat, that's not entirely true.

Any time something happens to a photography app -- or any or service I use, for that matter -- I like to use, I tend to start seeking replacements or something new and more fun to use.

In this case, there are two apps/services I've been having issues with of late.

The first is Flickr. I've been using Flickr for about 12 years now as a means by which to share my photos and, honestly, back them up to a remote location so they're never lost. The problem is that Flickr is owned by Yahoo and the parent company has been having BIG problems lately. They're being torn apart and sold and they've been hacked... multiple times.

At this point, I don't know what's going to happen to Flickr when the sales ax falls. And I'm not sure I care, either. I really only use it as a backup these days and don't deal with the social aspects of the site, few though they may be. I don't upload to groups, I don't comment on other people's photos, I don't even browse them anymore. And I'm never contacted regarding sharing my photos and I get the feeling that is mostly because everything I upload is not really quite as inspired artistically. I like what I'm shooting, but I'm not being as creative as I once was with my photography. This effectively renders moot the services that Flickr provides.

Oh, and there's the issue that Flickr no longer plays nice with Instagram by crossposting my photos. I've checked my settings several times and Flickr says it's authorized but not a single image has crossposted to it since the beginning of December.

The second is Instagram. It's not actually me that is having a problem here so much as it is Katie. Her account got hacked the other day and the person who hacked it completely took over her account going so far as changing her password and username. So now all of her photos look like they belong to another person despite that other person having the exact same images, the exact same followers, and the exact same people she follows back. It's really eerie to see all these photos of Nathan that don't belong to her anymore. And Instagram is dragging their ass about helping her resolve the situation.

If they (and their parent company, Facebook) don't do something soon, I might try one of those local news services that try to "help" people who aren't getting the help they need. If it takes public embarrassment to get the point across, then that's what we have to do.

Feb 21
I joined Snapchat today. I'm not sure what motivated it. I just decided to give it a shot. I'm obviously a bit late and, therefore, missed out on obtaining my regular web nick (kapgar) and had to settle for kapgar5.... 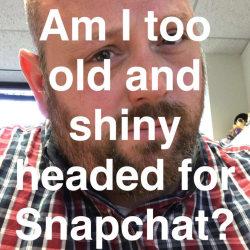 Feb 23
As this is still the Month o' Katie, I figured I'd give her some more Throwback Thursday treatment. Here are some of her early stills: This is from when she was approximately 6-9 months old. And, in this one, she's... 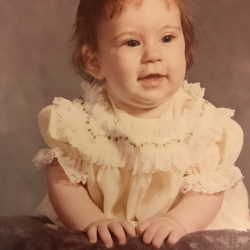 Flickr for me is the same. I have all of these photo services and places to put them - iCloud, Google, Flickr, IG... For the most part, I use Photos on my iDevices, but go over to Flickr when I see KevinAZ or Vahid post something over there. I like the immense amount of storage you get on Flickr, but I also get your points with the Yahoo pending sale and their overall mismanagement of their company.

I forgot to mention their complete slighting of the Flickr app when it comes to updates. One update in four years??

Stu's Instagram account got hacked the other day too. He was able to get back in because it was linked to his Facebook, so he tried to change everything back, including unfollowing hundreds of people, but then it got suspended due to breach of terms and conditions *sigh*. He hasn't fixed it yet.

I've just changed my Instagram password.. hadn't been changed in two years - probably a good time to do it!

Yeah, unfollowing en masse on any social media service is not good. They look at it as spam accounts.

I think it had been even longer than two years for us.