That doesn't mean I don't read others. I'm just doing a much better job of tempering my addiction by waiting for them to come out in collected editions that contain anywhere from four to six issues in a single copy that, in most cases, I can check out from my local library and binge read. I hate taking the money away from the creators like that, but comics are expensive.

My regular read is Jeff Lemire and Dustin Nguyen's Descender and, so long as they keep producing at the same quality level they are, I see no reason for me to change this habit. This comic is actually $1 less than most other single issues currently out there, so I feel no guilt whatsoever. Totally deserving. Actually, I'd pay the higher price for it, but you be quiet about that admission!

The irregular read is Roberto Aguirre-Sacasa and Francesco Francavilla's Afterlife with Archie. It is $1 more than Descender per issue but totally worth it in terms of story and art. And it's hard to feel guilty about paying $4 per issue when, as things have been going of late, I'm only spending that amount twice per year!

I'm not kidding. Check out this list comparing when issues came out and calculating the number of weeks in between each issue (with thanks to the Date Difference Calculator).

There was more than a year between issues 8 and 9!! As things stand, 34 weeks have passed so far between issues 10 and the phantom issue 11, if it were to have come out today, which it did not. Currently, a pre-order is being offered for issue 11 over on Comixology and they are advertising a placeholder date of December 27, 2017... 69 weeks after issue 10!!!

What makes it even worse is that issue 10 was a standalone story about Josie and the Pussycats, independent of the story arc that's been running from issue 7-9 (regardless what the title of the issue may be). That means that if you're looking at time elapsed between issues within the same storyline, 83 weeks will have passed by the placeholder date for issue 11.

I know I said that Afterlife with Archie is worth every penny of the $3.99 price tag, but this wait is getting ludicrous. I know writers and artists have other projects on their plate. Heck, I follow Francavilla on Twitter and see everything he is working on (that he shares). It's gorgeous stuff! But, c'mon! Fans are counting on you!

Unlike a guy I know who will defend George R.R. Martin's tardiness on the next Game of Thrones book to the death saying it's his right to take his time as he "owes us nothing" (his words), I believe that this is their job as they are being paid for it and, therefore, they need to produce on a more reasonable timeline.

But I'll still read it even if it is ridiculously late. I love it that much.

I just hope they're not planning on dropping this title unceremoniously. That would be a slap in the face to fans.

Apr 25
A week ago, my BlogBrother Marty Mankins of Banal Leakage started a new feature called "My Favorite Song" in which he highlights his favorite song from a musician or band. I liked the idea a lot, so I asked him... 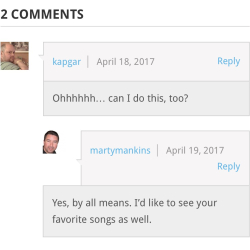 Apr 27
It was a sad day yesterday for this coffee drinking fool. Those of you who follow me on social media already saw this either on Instagram, Twitter, or Facebook along with requisite lamentation. But my beloved 20-year-old Bodum French press...