A week ago, my BlogBrother Marty Mankins of Banal Leakage started a new feature called "My Favorite Song" in which he highlights his favorite song from a musician or band. I liked the idea a lot, so I asked him if I could steal it and he said yes. At least I think he did. Let me check...

And that explains the "/MFS" in my post title... My Favorite Song to be done in conjunction with Tu(n)esday as I see fit. Cool?

Back in 2001, I got really heavily into The Ramones for the second or third time in my life and I wanted to find more that was considered to be similar in nature but more modern.

Somewhere on the web, I found a Chicago band called Alkaline Trio. I called around to some record stores but none had any of their three albums to date. So I found their label online and, being that it was 2001 and most independent record labels didn't have online sales or MP3 downloads, I called them to inquire about buying copies. They sold me all three albums and I had them a week later.

I was a happy camper. "Stupid Kid," from the album From Here to Infirmary, was a particular favorite. Good rocker. Great energy. Just what I needed at this time.

I listened to it way too much. So much I got burned out and stopped listening to them for about a decade before slowly getting back into the groove.

I got into my second AT phase around 2011. By now, they relocated to Los Angeles, signed with a new label, and all their stuff was available digitally. It was a new world.

My favorite at this time was "Kiss You to Death" from My Shame is True. A lot more mainstream than their early stuff but still a great track.

I don't listen to them as religiously as I did back in 2001-02, but, every once in a while, I like to go on a mini-Trio bender. Today was one of those days. And that's why this post happened.

If you ever want to find out what I'm listening to, check out my Last.fm account. You can find it in the Stalk link list off to the side (if you're checking this out on a desktop/laptop) or down below (if using a phone or tablet). The logo looks like this... 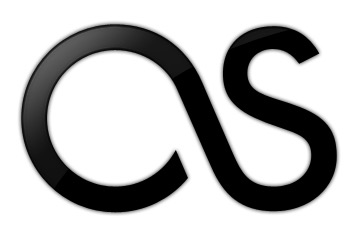 Awesome to see MFS on your blog. I used to listen to Alkaline Trio back some years ago. I think they played a Van's Warped Tour and I liked them enough to want to hear more. I don't recall the last time I heard their music, but from what I remember, it was good.