With all the acquisition and splitting apart discussions regarding Yahoo of late, my photographer friends and I that have or still are users of Flickr have been wondering what will happen to our beloved photo storage/sharing app.

The answer came today in the form of an email announcing that SmugMug is buying them from Yahoo or whoever possesses them currently. 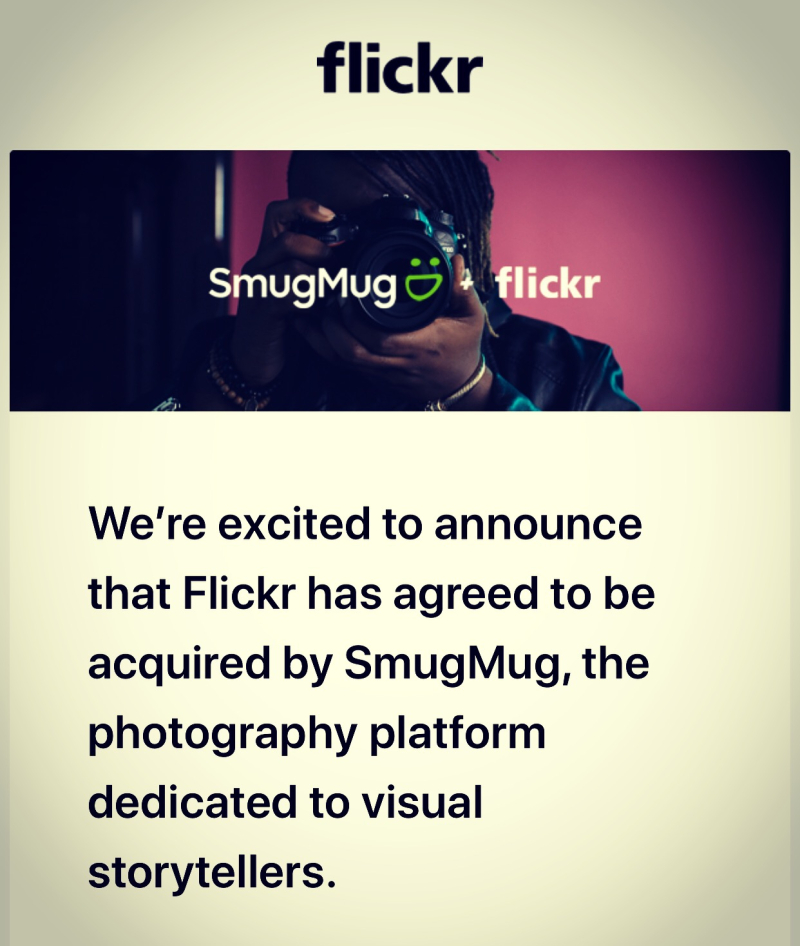 I know nothing about SmugMug. Never even heard of it until today. But it has some pretty rave reviews online. And it’s also apparently been around at least a decade, which is a good sign.

I’m just upset that they do not have a free option like Flickr has always had. I’ve been on the free option for several years now since I realized I wasn’t using the service as much as I did. Mostly because I’m mostly mobile and Flickr’s mobile offerings sucked. So I stopped paying for it. But my account still exists and I do grab photos or embeds from it for blog posts.

I do have the option to download my photos from Flickr before the end of May at which time all my content will move to SmugMug. I don’t know if I’ll be able to, though, because I lost password access a while ago and neither Yahoo nor Flickr have been able to help because neither respond to customer service requests. 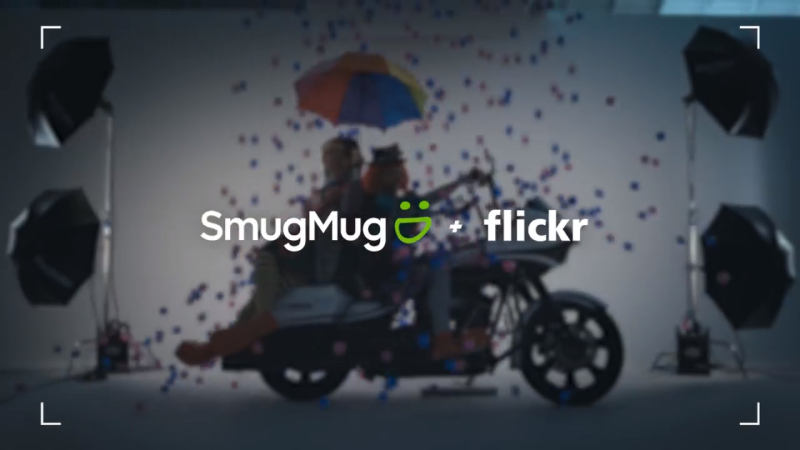 I might have to at least try it. See if it can serve as a viable backup for photo storage.

If you’re a Flickrer, what are you planning?

Apr 21
Despite a strong desire to sleep, I got up, showered, and went to Record Store Day 2018. Being that I got there only an hour before it started, I was #67 in line, which didn’t strike me as terrible. Until... 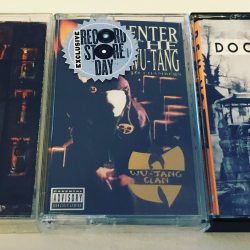 Apr 23
I get pretty excited when someone who has never correctly guessed a Macro Monday challenge photo finally gets one. It’s pretty darn cool. This week was one such first-time winner when my coworker and social media junkie, Sarah, nailed it.... 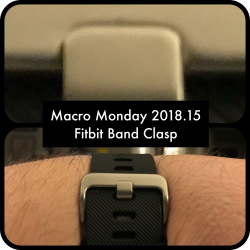 The article I just read says they are leaving Flickr as a standalone service and the free accounts will remain. Did you receive an email from them saying otherwise? I haven't gotten anything from them and wouldn't have even known about this had I not read your post.

I read it as leaving it alone for now. Not necessarily forever. I just assumed since they didn’t have anything about pricing on their site that included any free accounts. Everything else was all about the Flickr integration so I’d assume the price sheet to be as well.

My curious question is Pro accounts and if they are good until their renewal comes up again. I've had one for several years now and it just renewed at $24.95 in March. I see their Pro subscriptions are $45.95, which is almost double. I might have to rethink renewing, especially since I don't use the service as often.

I’ll stay as Flickr is one of my “must have” sites, and my photography home. I haven’t wanted to move anywhere else.

The fact that Instagam came on the scene and ate Flickr’s lunch on moblile a sore point for Flickrites. There’s quite a long, but super interesting article about how Yahoo totally screwed up the Flickr acquisition and the head exec at the time didn’t want Flickr authoring an iOS app. Le sigh. The rest is now Instagram history. https://gizmodo.com/5910223/how-yahoo-killed-flickr-and-lost-the-internet

The Flickr mobile app of today is good. I use it for browsing my feed and don’t really go to the website itself much. Flickr support is already baked into iOS as one of the “send to” targets, so I just upload directly from my phone’s camera roll. I still use the Flickr Uploadr app on my Mac for DSLR uploads. Those are fewer and further between these days mind.

My wife said to me the other day that she’s feeling icky with Facebook owning Instagram and she bemoans the ads injected into her feed. But Instagram has critical mass and when I said “just come back to Flickr” she smiled but said no.

One thing is for sure, Flickr is in far better hands now with Smugmug than it was after the carving off of Yahoo assets to Verizon. I’m optimistic that they can turn the ship around.

Agree that Yahoo destroyed it. I had no idea about the iOS integration. I may have to upload what’s on my iPhone now as a backup. It needs to be done one by one and can’t just auto upload like cloud storage apps?