It has been a month since my qualified personal removal from the world of social media. How’d it go? Well, that depends on how you look at it.

I never re-downloaded any of the apps I deleted.  Or felt the need to, for the most part.

But if you were to look at my Facebook feed and my Twitter timeline, you may never have noticed that I was gone. They were both pretty regularly populated with content from third party sources such as Instagram, Goodreads, Untappd, etc.

Heck, when I finally did put Twitter back on my phone and look at my Twitter timeline, I was amazed how much was there “from me,” as it were. And there were replies from my friends, as you’d expect. The only thing missing was my own replies back to them.

On Facebook, I couldn’t possibly care less about my lack of interaction. I've always known I don't care about Facebook, and removing myself from it for a month just sealed that perspective.

On Twitter, I found myself missing it. I also found myself wanting to catch up on news and read some headlines to get ideas for blog posts when I was mentally thin on ideas. Or if I wanted to complain about something or get some customer service, I had to discover other ways to do it... or not do it at all. 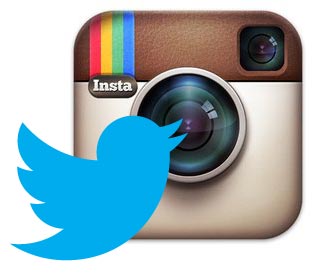 Although I find it annoying that Instagram now has a Facebook integration that shows a bubbled number when I have an update waiting for me in FB. What a load of crap. I wish I could shut that off, but to do so requires shutting off my connection to FB which is necessary for posting photos of Nathan.

Or is it? I wonder if there is an IFTTT recipe for that...

I have to say I'm not a fan of cross-posting. My SIL used to cross post photos to at least five different locations (her blog, flickr, instagram, twitter and facebook) and it drove me nuts. I didn't follow her on three of those but even seeing everything twice was super annoying. There's use of social media and then there's abuse .. IMHO :)

See, I don’t agree with you mostly because 99% of social media users prefer one vs another. Cross posting gets it to the greatest audience. If I annoy one person, that’s one person as opposed to a bunch of people missing out entirely.

I guess that must mean I'm on too many social media sites.. and feel the need to follow people on all of them in case they post to one but not another.. heh

I follow the same people in most too, but I don’t always go back and read through timelines. Too much work. I used to in Twitter but not anymore and do to some degree in I stagram but the “popularity” algorithms keep it from being easy.

I, for one, am glad you're back on Twitter.