This past weekend, I broke out the remote control truck so Nathan and I could have a little fun. My neighbor, Greg, who is also an r/c enthusiast had some of his cars out as well as a couple friends over and they were tooling around with them all in his garage.

I heard a weird chirping noise from my receiver and, as I'm about 25 years removed from my days of building and fixing r/c trucks, I took it to Greg to diagnose. They fixed it immediately and we proceeded to just drive them around the street and then race them off some ramps he had.

One of his friends had a Tamiya car and I said something about how Tamiya was what I used to race back in the day. The third guy there, a kid about 20 years old maybe, said, "I have a Blackfoot in my car!"

My ears perked up at the name. One that I hadn't heard in many years. I'd actually forgotten the name because the body of the r/c truck I had was destroyed and replaced with an unbranded generic long before I gave up racing. The body was what displayed the name "Blackfoot" as opposed to the chassis or guts. Simply put, this kid was telling me had one of my old trucks in his car.

"Seriously? A Blackfoot!? That's what I raced!"

He pulled the truck out of his backseat and showed it to me. 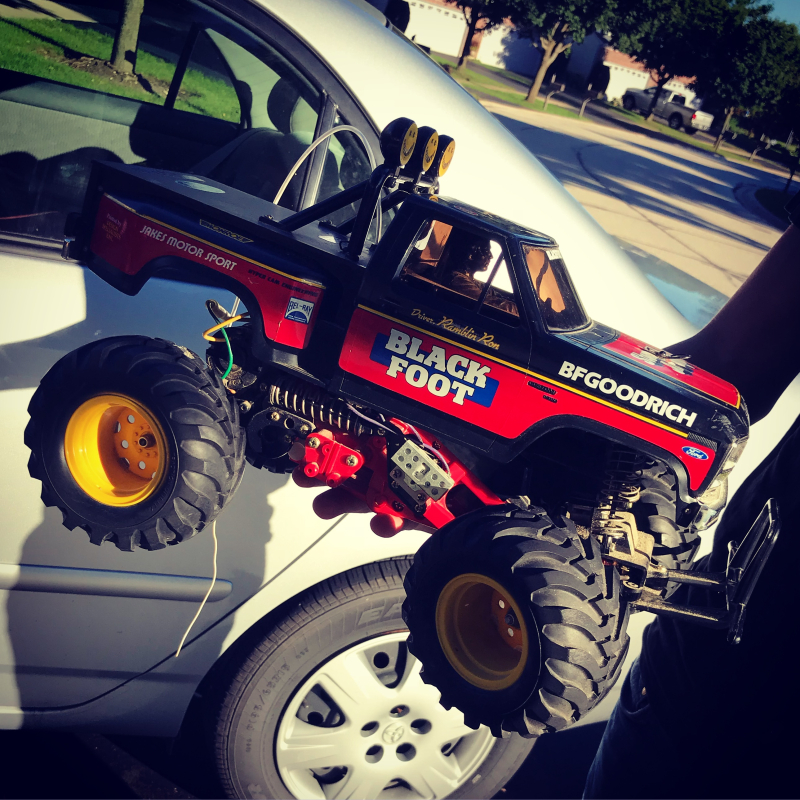 It was a little dirty and dusty from years of neglect. He was working to clean it and replace the electronic guts with more modern gear and then give it back to his dad as a gift as the truck originally belonged to him. But, despite the dirt and dust, it was perfect. Nothing missing. Even some of the pieces I had removed from mine were intact here as were all the original stickers.

It was a thing of beauty.

I wish I could remember what happened to mine. I know I had a second truck that I got rid of because it just didn't mean as much to me. But Blackfoot? I can't imagine why I would've parted with it unless parts of it were completely dead and too expensive to repair. But I don't remember that happening. And I'm pretty sure it's not in storage at my parents' house.

Gawd, I miss that truck. Not the fastest. Not the most showy. Just fun. Several years of fun. I built that thing from the studs up. I knew every last circuit of that truck. Kids (and adults) these days just don't get it. They open a box and everything is assembled for them already. Just put in some batteries and go to town. But if something goes wrong, they're SoL.

Me? I could fix them.

Now I have to fix the gearbox on my new r/c because something happened during a jump I took off Greg's ramp and I'm afraid of it. I'll still try it, though. And pray.