After a long day of swim lessons and re-organizing our media collection and nearly destroying our oven door (don’t ask), we decided to relax at home with the ol’ Nintendo GameCube.

Yes! We finally reconnected the Cube and... it worked!

I was worried it might not work, truth be told. We haven’t had it hooked up in like seven or more years. Maybe as much as a decade. 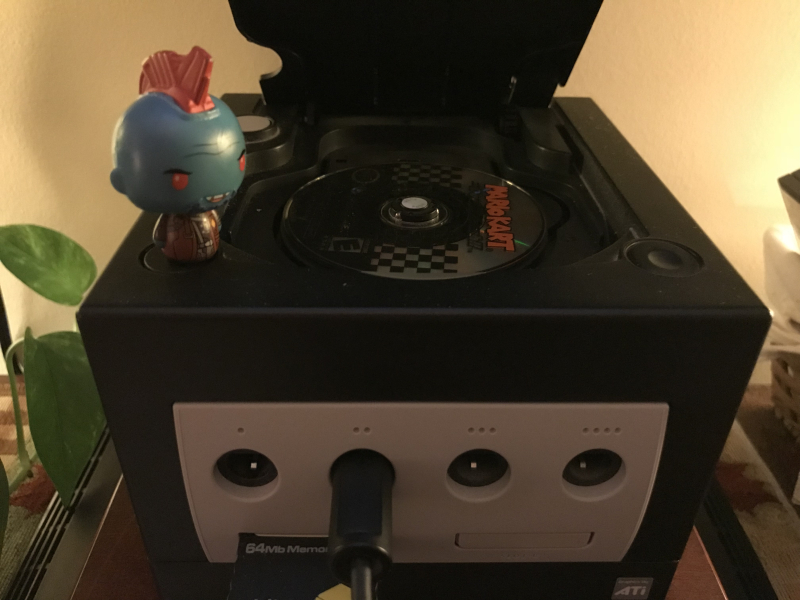 The first bunch of rounds of Mario Kart: Double Dash were interesting. Nathan adapted to the Cube controller pretty well but there’s so much going on in the game for a first-time gamer — what with the split screens, adapting three dimensions down to two, the steering, the speed control, the weapons — that I could understand him having a tough time. But he did well.

The worst part was having an SD gaming system running on an HD TV and trying to scale down the screen effectively and get the best out of the graphics we were given. Got some annoying gray anti-letterbox bars on either side, but it worked.

Nathan loved it! He and I powered through about a dozen races  changing characters and cars almost every time just for kicks.

And, let me tell ya, that kid has trash talk down. He’s funny as hell about it. Katie and I were both cracking up.

The downside? He was so riled up afterward that it took a lot longer than normal to get him to bed. Have to work on that timing thing.

Now I need to find some more games. I also have Star Wars LEGO: The Original Trilogy and picked up Meet the Robinsons the other day. Sucks that GameStop no longer carries them in-store. Oh well.