For our company's annual on-site celebration (where we bring in all our remote employees for a week of fun... and work... we were asked to provide photos of ourselves from 1995, the year the company was started.

Man, that is no easy task for me. In 1995, I was in full-blown photographer mode meaning I was behind the camera as much as possible, not in front of it. Tack onto that the fact that I have no idea where a lot of those photos are located. I wasn't as prolific with my photography simply due to the cost of processing film (yes, kiddies, we had to be far more deliberate with our shots back then) and what I did take was likely in storage at my parents' house and they're out of town.

So I did what anyone would do in this situation and referred to the dreaded Bookface. Why? Because if you can't find old photos of yourself that someone scanned and put on Facebook to mock you, then you can't find them anywhere. So I looked, and I found a couple.

Oh, these are gems. 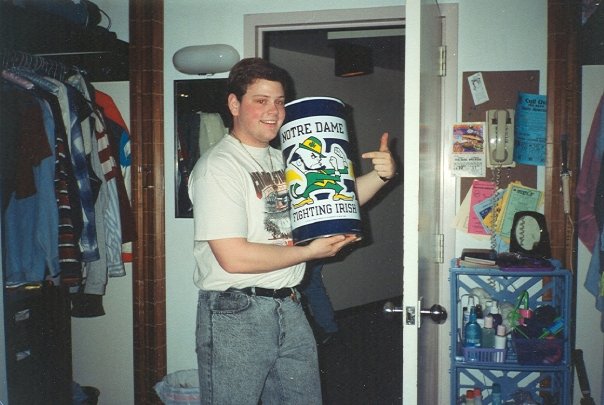 I'm not sure if this is from late freshman year or sometime sophomore year, so likely sometime in 1994. I'm judging based on my lack of a goatee which has been mostly a mainstay since I graduated high school in 1993. Man, look at those jeans! 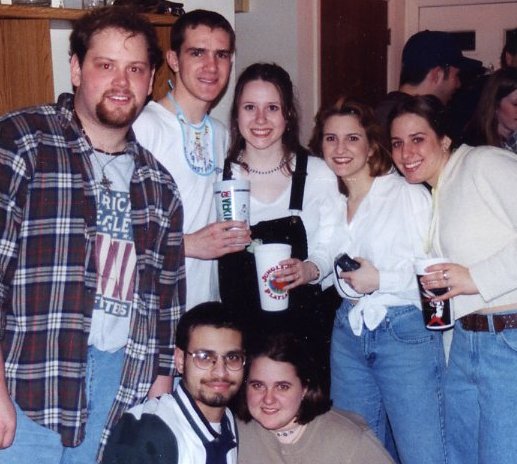 This one is from my junior year, so either 1995 or 1996. It's a group of us from my business fraternity and the girl who posted it on Bookface -- Claudia in the middle in the overalls -- confessed to me that she was completely shitfaced when this picture was taken. Judging by my hair, I probably wasn't in much better shape. Man, I haven't worn a necklace since about that time.

Sep 12
Thank you for checking out kapgar.com. Unfortunately, your host, kapgar, is busy trying to finish 650 pages of reading by the first week of October for review on GeeksofDoom.com. Please leave a message after the tone. If kapgar survives, he... 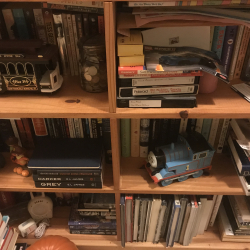 Sep 14
This past weekend, I broke out the remote control truck so Nathan and I could have a little fun. My neighbor, Greg, who is also an r/c enthusiast had some of his cars out as well as a couple friends... 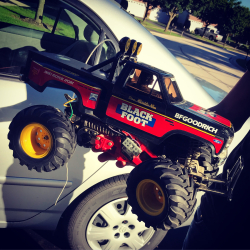 Ha! Those pictures are a awesome. I don't even know where my pre-digital pictures are these days. Which is a bit worrying. Must try to find them.