I know I really stretch the envelope of how "Throwback Thursday" is defined with my posts. But I really don't care. To me, it's all about remembering something from the past; not just ruminating on an old photo that I took. I hope that's okay with you.

Today, I'm throwing back 20 years almost to the day (the actual 20th anniversary would be this Saturday) when Mark McGwire broke Roger Maris' single-season homerun record.

As a baseball junkie through most of my childhood until 1994, the race between the Cardinals' first baseman and Cubs' outfielder Sammy Sosa was exactly what I needed to get out of my post-strike funk. I just stopped caring. But in 1998, if you were ever a baseball fan, even just tangentially, you were sucked back in to witness the splendor of what was going on in the NL Central.

Sure, the whole affair has been tainted by performance enhancing drugs (PEDs), but, at the time, when what they were taking was technically legal, it didn't matter. It was just too much fun to watch and I would've been fine with either of those two guys gaining the crown. 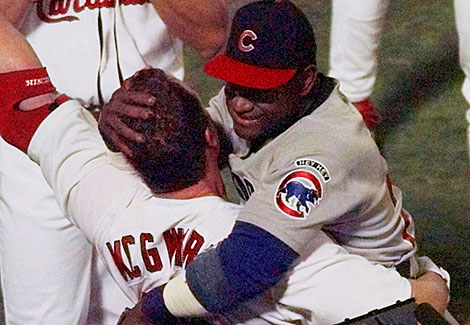 I preferred McGwire as I'd been a fan of him since his days as an Oakland Athletic, but Sosa always struck me as a pretty decent guy. I just didn't want to see Barry Bonds break the record first (although he now holds the single-season homerun mark set three years later) because he was always such a jackass.

I'm going to be honest with you... I loved this time in sports. I miss McGwire and Sosa and am torn on their inclusion in the Hall of Fame although I don't think either is eligible any longer anyway.

Man, that was a fun summer.