Due to the fact we will no longer be able to have DirecTV starting next year (HOA installing new roofs and decreeing that no dishes can be mounted on the roof anymore), Katie and I have been researching new means by which to consume visual entertainment.

Part of our research involved wanting to finally try out AppleTV and seeing what it’s all about. Turns out one of my coworkers just bought an AppleTV v4 and had a v2 collecting dust at home. So he hard reset it and gave it to me.

We hooked it up today and that part was way easy. Scary easy.

Connecting my iTunes account, though? What a pain the ass.

I punched in my account and password three times before realizing that the reason I wasn’t receiving the account passcode verification was because it was going to nathan’s iPad instead of my iPhone and he was actively using his iPad and swiping away the notifications. So then I tried six more times and the ATV wouldn’t accept the password/passcode combo. I nearly gave up.

I decided to try one more time and it finally took. Thank god.

We went out and bought a new ATV remote at Best Buy (that’s the one thing my coworker could not find so I borrowed one from someone else). And now we’re firing on all cylinders.

At least until we change our internet provider. When that happens, all the shit on which we’ll have to update connections is gonna be astounding. And painful. Oy.

Oct 13
Happy 17th anniversary, hon! I love you with all my heart and can’t imagine my life without you. Yes, we went to our alma mater for the homecoming football game for our anniversary. It was a fun time. More details... Oct 15
There was some heavy participation this past week. Tons of guesses on the blog, Facebook, and Instagram. I like that! A lot of you guessed correctly that it was a Nintendo logo. But I wanted a more specific guess and... 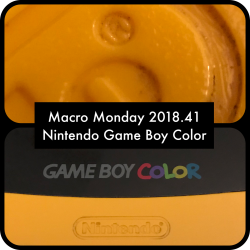 Would be interested to hear what you find out. We have DirecTV, but have been thinking about changing to other (perhaps cheaper) options. The bad news is, we live in a data hole, so streaming options aren't the best for us.

I’m sure whatever route we take will be posted here for insight from others.

I see this reply. I have figured out to get comments here on my MacBook running macOS Mojave. I have to right click on the view comments link, which opens up another window and shows the comments. Odd, but until I can figure out what's causing the issue, this is a legit work around.

I had an Apple TV v2 and a v3 before getting my current v4 (my daughter has my v3 now for Netflix and HBO). Sounds like that iTunes account connection experience was a bit cumbersome. Good to hear you are active with the Apple TV v2. I'd be curious to hear more of how it's working out after a month or two.

I’m sure I’ll have an update to this whole rigmarole.

I still think this is a secure thing. Try going to www.kapgar.com instead of kapgar.com and see if that does it. They’re trying to figure out why the latter is t redirecting to the former. That workaround fixes my search issue. So maybe commenting as well.

www.kapgar.com (this link https://www.kapgar.com/my_weblog/2018/10/appletv.html which appears to be the https version) goes right to the comments.