I am such a terrible dad. Super duper terrible.

The other night, I was putting Nathan to bed when he asked if he could see The Avengers: Endgame. I said no. He asked why. I said because he hasn't seen any of the Avengers films so far so Endgame wouldn't make sense (thinking that I'm a hero for not making it about his age). He then asked to see Infinity War (damn, so much for that approach). I said no. He asked why. I said he was too young. He said he could handle it. I asked how. He said he already knew that Thanos kills Loki so how bad could it be.

I must preface this by saying that Katie and I have a policy where if Nathan asks a question, we answer it as honestly as possible. Sometimes with no punches pulled.

I looked at him and said that the film is just too evil and dark and is meant for adults. He asked me to tell him how. I thought about it for a second and then said, "Well, you know how I told you that Thanos kills Loki in Infinity War? He does a lot worse than that."

I shouldn't have to say this considering the film is a year old, but I'm going to cover my bases anyway...

I went straight for the jugular by telling him that Thanos kills one of his favorite characters, Gamora. I even went so far as to describe that Thanos, a villain Nathan reveres, kills his own daughter by dropping her off a cliff. His eyes got wide.

I then started to list off everyone else Thanos kills: Winter Soldier, Drax, Star-Lord, Groot, Black Panther ("He's your favorite, Dad!"), Shuri, Mantis, Doctor Strange, Spider-Man ("Not Spider-Man!"), Falcon, Heimdall ("Who?" "Thor's best friend." "Did Thor cry?" "Yes, he cried while he watched Heimdall and Loki be killed by Thanos right in front of his eyes."), Scarlet Witch, Vision, Wasp, Nick Fury, and Maria Hill.

By the end, he was crying. I felt bad, but I also felt good that he knew the truth... That villains are bad and not always in a good or cute way like cartoons sometimes portray them. They should not be adored. 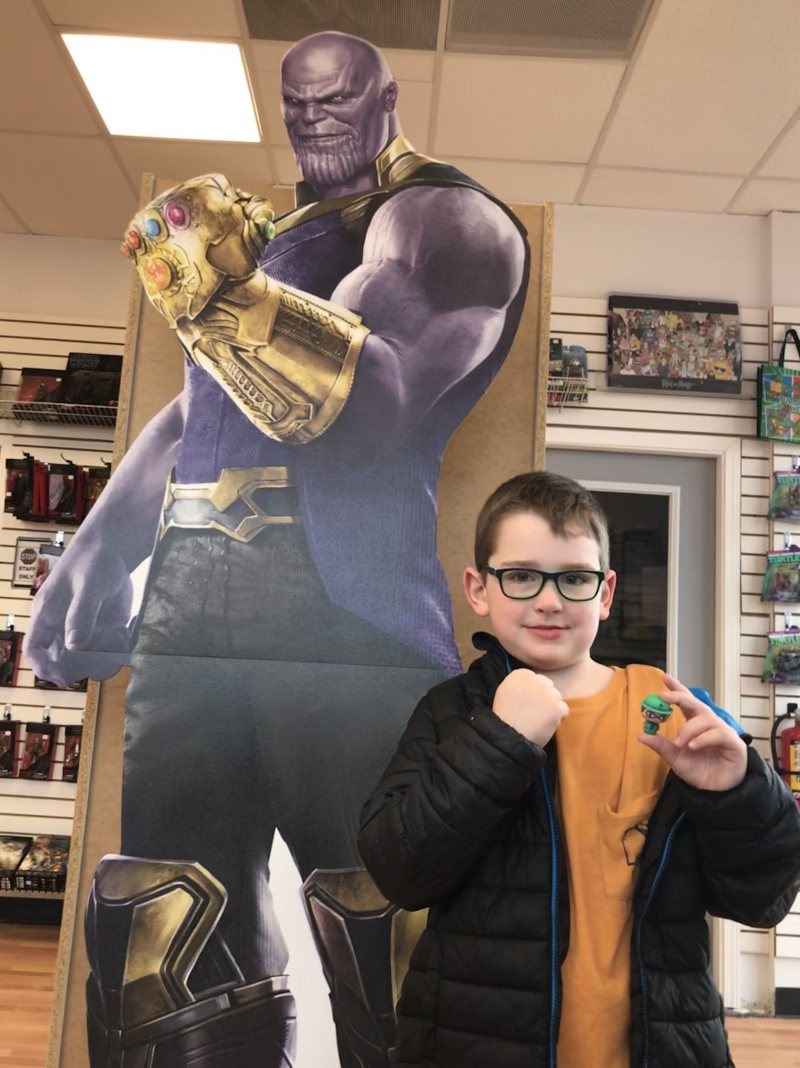 But then I also told him that all these characters are just that... characters... played by actors. "You mean they're not real?" I was surprised he didn't already know that. To this point, he has shown a preternatural understanding of what's real and what's fake, so I was caught off guard.

"Yes," I said, "They're all actors and none of these characters are real at all. In fact Thanos is played by a guy named Josh Brolin who also plays a character named Cable in the Deadpool movies. And you know him from something else." That's when I dropped this little gem on him...

I think he gets it now. And, yes, he has seen The Goonies.

Oh, and I did see Endgame the other night. It was magnificent.

I think you were wise to clue him in on the good and the bad, the real and pretend. Good job, Dad!!

I think it's kinda cool that of all the actors from The Goonies, Josh Brolin has had the better career by far.

Personally, I like your approach to his questions. The pulling no punches approach is part harsh, but it's open and honest. Because at some point, he will remember that conversation as he gets older.

And I loved Endgame. So good. Both times I've seen it were stellar.

Thanks. And I loved Endgame both times I’ve seen it as well. It has surpassed First Avenger.