I feel like I’m writing announcements like this every year, but, yet again, another Fitbit has bitten the dust.

Much like my Fitbits in the past, what started as one problem quickly spiraled into several until it was dead. It may have been a perfectly healthy device for several months, even a year. But once that first crack penetrated its veneer, everything else happened in short order.

I noticed issues with my Blaze starting a couple weeks ago. My back button stopped working. That meant if I went too deep into menus, I couldn’t get back out. So I had to be careful how I swiped and tapped. The only way to get out would be to go into the app, choose a new face, and re-sync a soft reset. Then the battery started losing its charge progressively faster until it wasn’t holding a charge for anymore than six hours.

The warranty on this device is 12 months. Care to guess how old mine was? 13 months.

Pain in the butt.

I contacted Fitbit. They offered me a $25 certificate on a new model. However, unlike in the past, I couldn’t use it on any model under $125. Screw that.

So I told Katie I was done with them even though she offered to get me one for Father’s Day.

Then she began looking on eBay and found that you can buy a Fitbit Versa pebble only (the central device without the band and charger) for wayyyyyy less than the cost of a new device. She has a Versa and has been very happy with it.

I looked up bands and could get one I like for $5. 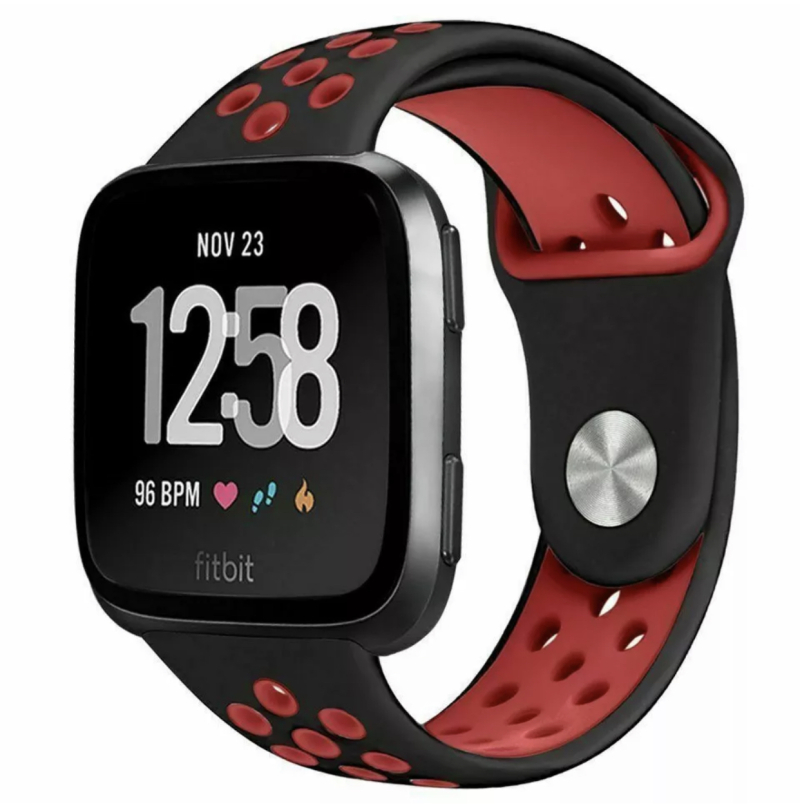 This is exactly what I’ll have, colored band and all.

You may be worried that this is an old device. It’s not! It’s brand new. Basically someone owns a tracker, something goes wrong with said tracker, and it’s still under warranty so Fitbit sends them a new one that is pebble only sealed in a plastic baggy to save shipping costs and materials. Then they turn around and sell it on eBay, unopened, for the going rate. It’s pretty brilliant.

Sure, Frankensteining a fitness tracker is neither the easiest way nor the way the company would want you to do it. But I’m doing it anyway. It won’t have a manufacturer extended warranty (something I wish they offered before but I’ve never seen) but I am covered by SquareTrade for two years for $6.

All told — between pebble, band, and warranty (I’m using Katie’s charger for now — it’s costing me less than 1/3 what a new one would be in store or online. At what I paid, I won’t even feel bad if it doesn’t last too long. But, even so, I have a warranty!

I’m never buying one of these in store again.

Jun 12
I realized something tonight as I was logging my most recent finished book into my Goodreads account, I am exactly nine reviews behind. Lately, I’ve been trying so hard to find a reading rhythm that I haven’t necessarily been taking...

Jun 14
Why do people almost always get sick just before going on vacation? Today, I started getting some massive headaches and every square inch of my body ached. When I put Nathan to bed, he was cuddling with me to warm... That is a really cool looking watch I must say.

It looks very similar to an Apple Watch, including the band style with the holes and clasp.

From the details of the story, I'd be buying the next Fitbit from eBay. Of course, they should be lasting longer.

I feel like smart watches do too much to be expected to last any real length of time. Hence why I won’t spend on an Apple Watch.

I get that. The Apple Watch is $400, which is a lot more than any of the Fitbit models. And I've had a fair number of Fitbits die on me or get lost.

The Apple Watch I have now (Series 4) has been pretty stable. My wife ended up getting my previous Apple Watch (Series 2) and she's been using it for daily walks.

I don’t think I’ve heard many complaints either about the Apple Watch either. It’s just that initial investment. It hurts.