Earlier today, I was reading an article on CNN.com in response to Trump's tweets aimed at Democratic Reps. Alexandria Ocasio-Cortez , Ilhan Omar, Rashida Tlaib and Ayanna Pressley telling them to go back to where they came from and berating them in other ways simply for being women of color. 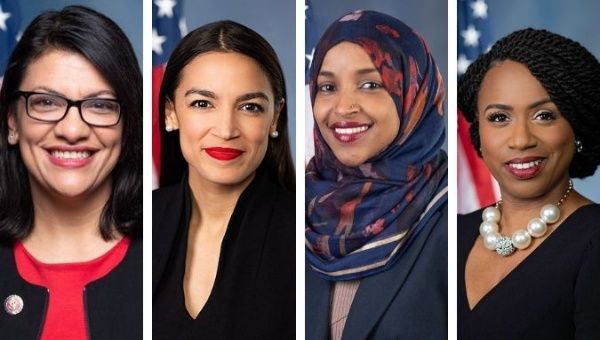 In one America, people speak out in protest after a President claims that African, Haitian, and Salvadoran immigrants come from "sh**hole" countries. In the other America, people nod in agreement.

In one America, people become outraged when administration officials snatch migrant children from their mothers' arms and detain them for weeks in filthy conditions with no repercussions. In the other America, people remain silent.

You wanna know something? Blake is absolutely, 100% correct. There are two Americas. It's almost like The Matrix where we are living one life completely oblivious to the other universe that we inhabit. Maybe we're not oblivious, but, rather, we just prefer to not acknowledge that the flip side, the Upside Down, exists. Revel in our own ignorance, as it were.

But that other America is there. And it's very aware of us. It's been there all this time, hiding in the darkest recesses of our country, biding its time, waiting to pounce.

This anti-POC (people of color)/anti-immigrant/anti-women sentiment is not something new. It's certainly not something that died and was suddenly resurrected when Trump was voted into office. We just refused to see it there. And now that these hate groups have been given charge to publicly express their views, they are. And it won't stop. They're gaining a full head of steam and I don't even think the removal of our current administration would quell them.

I'm thoroughly disgusted about the prospects.

Writer's Note: I know I don't tackle politics all that often. But I do find it odd that the opinion above was written by the same guy who, last Thursday, reviewed OREO cookies, and, tomorrow, barring anything else post worthy happening, will be discussing toilet paper. Yes, toilet paper.

The idiocy of it all is not lost on me.

I'm Kevin Apgar, and I'm running for... nope, not happening.

Are you watching Years and Years?

Never heard of it.

It's a British show that HBO picked up for the US. I think it's only six episodes long and the 5th episode aired this week.

I hesitate to recommend it because it feels a little too possible.

Hmmm... that kinda scares me.

I think the election gave permission and normalization to something that should have been stamped out. I'm not saying it was possible, just that it should have been It IS ugly. I feel hatred and sadness in ways I never did before in regards to our political climate - even with some major problems.

My despair comes in when I can't see any way to reach people who have decided that someone who is different is somehow inferior and beneath them in rights. It just goes against common sense, it's irrational. HOW to you change the irrational?

My other thought, however, is that the way you beat a strong, banded group of monsters is to band together and build an even stronger group to overcome them. People have to snap out of their complacency and realize THEY have do something too. The media makes it look like there are enough people working... but there aren't.

Our country has had a lot of really bad periods. We're in one now. I hope we overcome it.

I hope we do, too. The biggest issue with this dark period versus similar ones in the past, though, is that these beliefs perpetuate via the web. If someone before thought they were the last one to believe something, that was the end of it. That is no longer the case. It’s the same thing with radical religion. It’s why we’ll never truly defeat the Taliban and Al Qaeda and ISIS. There will always be someone there on the web to lend emotional, personnel, or resource support. It’s disgusting but it’s there and I’m not sure how it could ever be truly eliminated.