Today, the U.S. Women’s National (Soccer/Football) Team won the 2019 World Cup for the second consecutive time, fourth overall. They came, they saw, they conquered... on the biggest stage possible in the most dominating way possible. 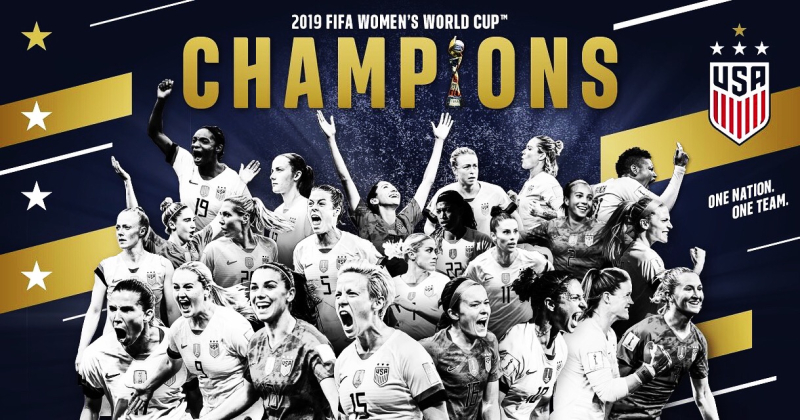 Man, it was glorious to behold.

Sorry... woman, it was glorious to behold.

To me, these women are infinitely more interesting and fun to watch than men. I can name many members of the women’s team whereas I know no names of the men’s team (that I’m aware of). I find myself inspired to watch the women and not the men.

And I’ve been this way for many years.

I’ve watched more women's World Cup games than I can count in the last two decades and I can count on one hand the number of men’s games I’ve seen.

So why aren’t the women earning as much as the men? It’s pretty unfathomable. It’s so bad that, on National Woman’s Day, the entirety of the USWNT filed suit against U.S. Soccer for discrimination. The suit even stated that, in many cases, men were allowed to play a tournament on grass while women playing the same tournament were relegated to the much harsher AstroTurf. At one time, AstroTurf was rolled out on top of natural grass for the women to play on to preserve the grass for the men.

The inequality needs to end. In all industries. That’s all there is to it. And I’m clearly not the only one who thinks this way. These tweets and quotes have been all over my timeline today...

Congratulations to the #USWNT on their 4th World Cup win! These athletes have brought more attention, support, & pride to women’s sport than perhaps any other team in history. It is long past time to pay them what they rightly deserve. 🇺🇸🏆🏆🏆🏆 #USAvNED #WorldCupfinal #EqualPay

This is a quote from retired USWNT superstar Abby Wambach. 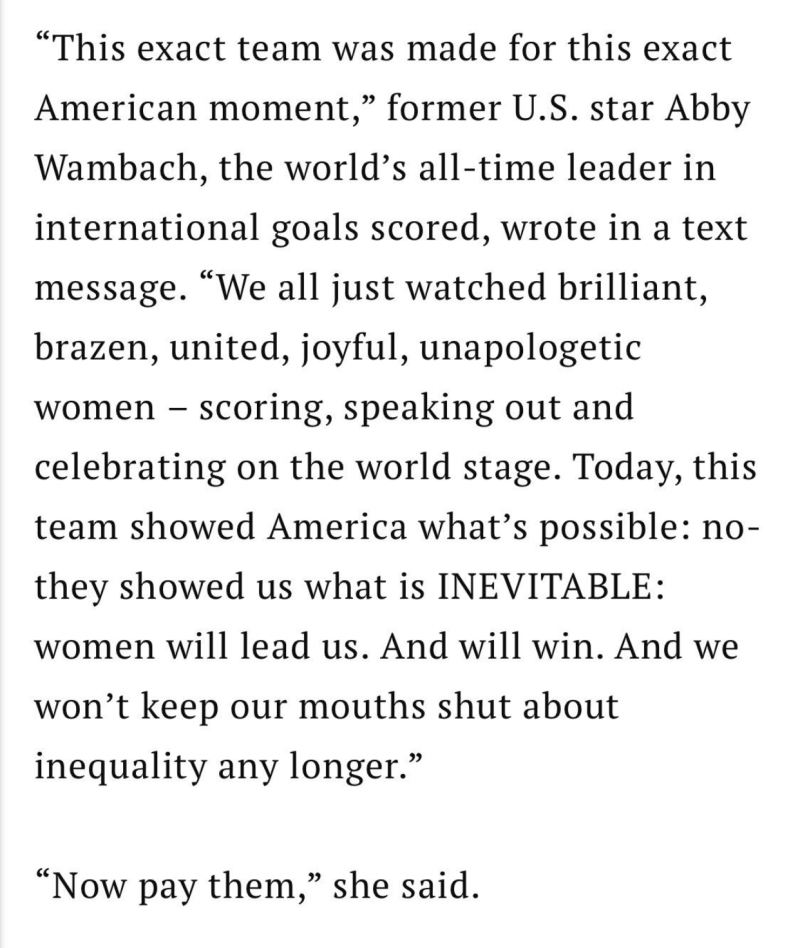 And, while this is humorous, it’s pretty pointed with its sarcasm.

me explaining to my boyfriend why equal pay makes actually no sense AT ALL !! pic.twitter.com/eCBSD25YTK

This has been so bad for so long. My husband is soccer obsessed, so he's been talking about this for a LONG time (he coached both boys and girls, but ran a whole soccer club for girls here - so he thinks it's just ridiculous how the pay inequity keeps getting pushed to the side - they need to be equal or frankly paid more because they bring in MORE money for soccer than the men do, but make a 10th of what the men do? COME ON!)

The women bring in more money *and* are more successful.