I love carving jack-o'-lanterns (or do you prefer "jack o'lantern"?). It's always fun to just sit down, take out a knife, and stab and cut at something repeatedly without fear of prosecution.

I keed! I keed! I swear I have no homicidal tendencies against anything other than pumpkins (the meat I cook is already dead).

Carving was just what we did today. One pumpkin for each of us to figure out a design and then I cut. Nathan will draw his design on a pumpkin and he might slice it up a little bit, but then he gets bored and walks away. Katie helps me clean out the guts and then separates the seeds from the pulp for baking later. But the carving is primarily me. And I love it.

I did something new this year that I've never tried before and that is skinning back some of the orange outer skin and leaving the white/yellow pulp intact. I'd always just carved straight through from skin to the interior and admired those that give their pumpkins greater depth from afar.

Not today, though. I did some skinning in small scale. Some detail work on mine and Nathan's pumpkins and I used it for support on Katie's pumpkin. I think I'll keep refining my skills each year and see what else I can accomplish. Plus it was nice to be able to use my clay sculpting tools. They've been sitting in my art kit collecting dust for years now.

Can you guess whose jack-o'-lantern is whose? 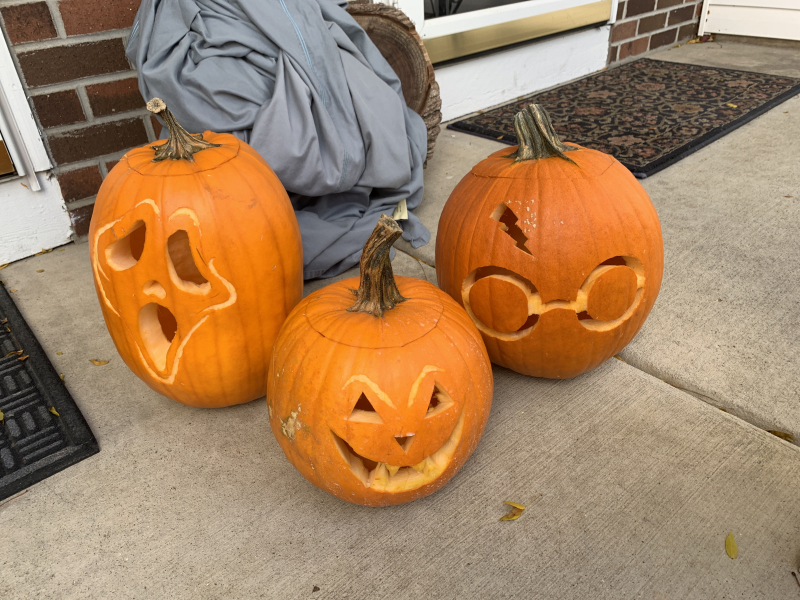 Damn, was my hand sore afterwards.