Currently, Nathan’s iPad and all his apps are registered in my name. At first, the reason for this was simplicity. It was just so much easier to get everything signed up and initialized by not creating new accounts from scratch.

Now, though, it has made it a lot easier for me to see what he’s doing on those apps. Particularly YouTube on which he’s registered using my Gmail account.

I am able to see what he watches, what he saves, what he subscribes to, or anything else going on. And since YouTube is what he does 99% of the time that he uses his iPad, this has become very helpful.

But going in there and looking at what he does makes me realize how little I do on the service. Sure, it is where I post all my The Damn Fool Network videos, but aside from that?

I subscribe to a mere seven channels of which only five are active, my faves being Kroft talks about Movies (he talks a lot about Ridley Scott’s Alien franchise) and Randy Rainbow (who may as well be the next Weird Al).

I have favorited only three videos – one that my mom posted of Nathan as a baby...

one of a high-pitched frequency that scares away mice because I’m paranoid of them in my house...

and this little gem that I re-watch from time to time just to get a laugh when I need it.

I’m pretty sure I’ve posted that last one at least once, maybe twice, but I’m too lazy to look.

I think I’m actually okay with that.

Jun 3
Kids can be such little assholes. Nathan has done a fantastic job over the course of the last year learning to read. He's great at it! And, for a while, he was very proud of himself and enjoyed doing it....

Jun 5
On the negative side of today, Netflix’s Space Force was, um, strange to say the very least. Some of the driest humor to come from Greg Daniels ever. On the positive side, Google Maps wastes zero time on updates. I’m... 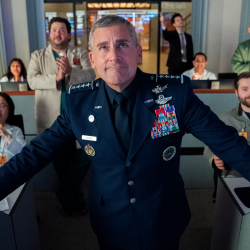