I just wrapped up reading Dr. Ibram X. Kendi's How to Be an Anti-Racist (review forthcoming) and I'm trying to figure out what my next audiobook will be. I feel a need to go the fiction route and, after watching the teaser for next year's release of Isaac Asimov's Foundation on Apple TV +, I'm thinking some hard science fiction might be the way to go.

Mind you, aside from a couple of Frank Herbert's Dune novels, I've never really delved much into so-called hard science fiction. Most of it is softball stuff like Star Wars and whatnot. Dune is pretty intense and I loved it (Dune Messiah not so much). Enough that I've read the original book twice now and have considered a third go-round given the pending release of yet another attempt to re-create the world of Arrakis on film.

But I don't want to do this alone. I want to drag some of you along on the ride, kicking and screaming if need be.

Would anyone like to try reading the original novel, Foundation, with me? We can discuss from that point if we're going to continue forward with any of its sequels or prequels. Or maybe just the core three (Foundation, Foundation and Empire, and Second Foundation)? 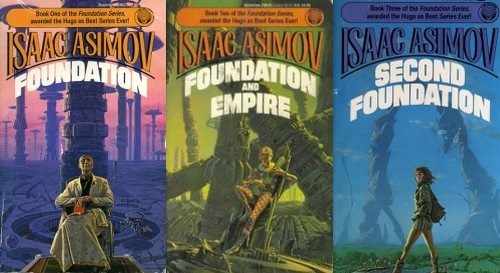 If you'd like a little more information, check out Wikipedia. Here are links to the run of books...

I've read the Foundation books, albeit some time ago. They're really good. I might still have them on my Kindle. I'd be up for a re-read. Warning: I'm 6 months into my "I should read in 2020" and I've read...NOTHING. So I might be (as the Brits say) all mouth and no trousers. But, maybe peer pressure is the only way I *will* read?

I’m hoping this is that peer pressure some of us need. I’ve got a few coworkers in for the challenge, too. We’re starting with just book the first to see what we think.

Foundation is one of those fundamental series that I never got around to reading. (Except for Prelude to Foundation, which came along like 30 years later.) I should see if my local library has them...

Four out of seven of the books were about 30+ years after the core three books. You want in?

Be aware that if you venture into the newer parts of the series, it is important to read other Asimov books first.

I was planning to reread Anthony’s Incarnations of Immortality series, but I’d be happy to switch to the Foundation series. I just double-checked that the whole thing is in my bookshelf.

Can you safely read the core three books from 1951-53 without needing backstory from other books?

I believe so, yes.

Is there a schedule or any sort of progress tracking for the Foundation reading?

Nah. Trying to keep it as informal as possible so people want to keep up with it. Unless you’ve got a widget we can plug in on the sidebar here.

I'd be interested, but my reading time has gone way down since most of it was commute time and I'm not doing that right now. Looking forward to your take on Kendi's book. That's one that I HAVE finished this year.

If you’re on Goodreads, my review of Kendi is there. Friend me! If not, let me know and I can share alternatively. It’s not a very in-depth review. Not like the ones I wrote for Geeks Of Doom. As to reading time, yeah, I hear ya. If I didn’t go for the occasional walk, I’d never get any reading done. It’s truly sad. And my Podcast listening? Let’s not even go there. But feel free to join up with Foundation. It’s very informal. Just trying to get them done before the show comes out next year.