Earlier today, I saw a sponsored ad on Instagram for an app that finds you better rates on car insurance.

The ad starts with a guy taking flowers to his girlfriend who is busy getting ready to pay her car insurance bill online. She has her bill out in front of her (and it is clearly either State Farm or uses a logo meant to make it look like State Farm) and it reads that her total owed is about $386 and some change.

The boyfriend says he can save her a ton of money and takes her phone and downloads some app and asks her a few questions. Within moments, he has a quote for her of $65.30 or so per month.

She loses her ever-loving shit with excitement and boyfriend is the hero of the day! I knew something was rotten and I watched the ad again just to confirm my suspicions. I got the totals for the State Farm insurance bill and then I took the actual monthly quote from the app... and multiplied it by six! Why? Because State Farm and many other companies bill on a six-month cycle for most of their plans.

Once you did that, the bill the hero boyfriend got for his damsel in distress became $392 or so dollars for the six-month cycle.

What a misleading load of shit!

I went to leave a comment to warn others about this scam when I saw that the advertiser had blocked commenting from the ad.

You pansy pricks! You know you’re full of shit but don’t want to be called on it.

Unfortunately I shut down IG before it dawned on me to report the ad for misleading content. I wonder if I can find it again.

Moral of the story, kiddos, is to not believe advertisers. In this day and age, there are even fewer checks and balances in place keeping them honest.

Nov 27
One of the great things about Black Friday as well as the few days leading up to and immediately following it is that you are unpleasantly reminded of all the companies, businesses, organizations, and other newsletters you have subscribed to...

Nov 29
I knew nine books would be a stretch. BIIIIGGGGGG stretch. As of today, I'm only through five of them. Oddly, not the five you might expect. Here's the list of what I planned to read: Mark Andrew Smith’s Sullivan’s Sluggers... 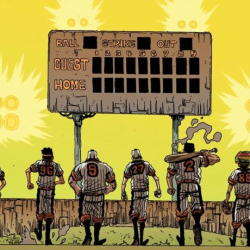 As soon as you mentioned both accounts I knew they weren’t comparing the same payment frequency. Shady!

I worked in telemarketing a long time ago on a special project trying to get people to switch insurance companies. When they agreed to a quote it was a lengthy ten minute process only to end up quoting them MORE than they were currently paying. Needless to say that project didn’t last very long.

Ugh. How many people would curse at you for that?

Right? And I wonder how many fall for it.