We learned how to use Lyft really, really early this morning. Not because we wanted to, but out of necessity. Ugh.

We got into LAX and went to the LAX-IT lot, which is where you go to get shuttles and taxis and ride-shares like Über and Lyft.

We opted to not deal with a rental car pickup that late at night and pay an extra day’s rental for time we wouldn’t use it. Our hotel’s shuttle stopped running at 10 p.m. and we were there after midnight so we went to the lot and grabbed a taxi and asked him to take us to our hotel on the south side of the airport.

We got there, got our bags, paid and tipped the driver, and went into the hotel. The driver left. When we asked for our key, the guy at the counter said he didn’t have a reservation in our name. I confirmed the name of the hotel on our reservation and he told us we were at that hotel but the one on the north side of the airport.

He couldn’t transfer our reservation because they were separate hotels and his shuttle couldn’t take us to the other hotel because it was too far. But the shuttle would take us back to LAX-IT where we could get another cab or call our own cab to come get us but he had no idea how much it would cost.

So we got on the shuttle and while begging the driver to take us to the other hotel, we told her our story and she recommended we get off and just call an Über or Lyft because it would cost half that of a cab. I told her we’d never used ridesharing before. She reassured us it was easy and dropped us off at the bad hotel again.

I opted for Lyft because of all the horrible stories I’ve read lately about how Über has been screwing with their drivers and customers. It was all set up in two minutes and I had a driver coming out to get us at about 2 a.m. He was a really nice guy and got us where we needed to go. It was double the distance at less than half the cost so, technicality, it was about one quarter what we paid. Unbelievable.

I tipped him well in the app, gave him a five-star review, and left a glowing written review.

From here on out, fuhgeddabout taxis. Why would I bother? Lyft is it.

Don’t get me started on our rental car pickup later that same morning.

Jul 15
Remember the old days of going to a pizza parlor and drinks were served in those translucent red plastic cups with either the logo of the parlor or a soda logo on them? I loved those cups and totally wanted... 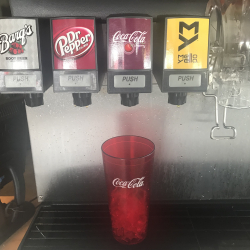 Jul 17
I’m gonna make this simple and just post some photos from our trip to Disneyland today. Sound good? Nathan and Chewbacca One of my favorites… Hammerhead, AKA Momaw Nadon Us and the Millennium Falcon Rey First Order Stormtroopers Nathan at... We also chose Lyft as our ride sharing service of choice. Uber has a bit of a reputation for being quite the scummy company. Lyft has always been great, app is good, car always on time, drivers nice etc.