A co-worker had a little technical issue with a SaaS solution at work today. It was similar to one I had a week ago, so I mentioned it and told her what to look for. She did and was able to confirm that what we experienced was the same issue and would likely resolve itself with a little patience. Basically, it was a system glitch that would clear up, but none of her data was lost as she had feared.

In our Zoom chat, I mentioned how I was happy it was nothing more than a... (and used this gif)...

Of course, being me, this lead to diving down a Wikipedia rabbit hole on Sarah Silverman, the actress who voiced Vanellope von Schweetz, the character in the gif above. Love her. She's pretty great. But, never moreso than 14 years ago (FOUR. TEEN. YEARS. A. GO.) when she performed this little gem on then-boyfriend Jimmy Kimmel's previous late night show.

Oh, the things that are stored on the Interwebs.

This makes me really miss the heyday of Kimmel v. Damon.

On the bed! On the floor! On the towel by the door!

Aug 5
A skyline so bold exaggerated slightly. These aren't drawn to scale. Sorry if you don’t dig on the haikus, but I need this to keep me writing until I’m inspired to come up with something real. 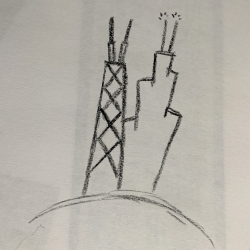 Aug 7
As I announced previously, Katie and I were late to the game on Ted Lasso. Like… we only started watching season 1 in early June if this year. But we tore through it and loved it immensely and now we’re... 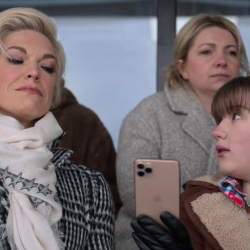 Some of her stand up is...great, albeit not for children's ears. And don't forget to watch her in that Star Trek Voyager episode.

She was in an episode of Voyager? Wow.