I've decided that I'm going to start a listing of horror films I've been rewatching over the last few months over on my Rankings page and I'm going to call it Jay-Mike-Fred: A Horror Compendium in honor of the three major movie slashers that got me into the genre and whose series I hope to be able to rank fully within a few months... Jason Voorhees, Michael Myers, and Freddy Krueger.

I won't limit it to just these three. Basically any horror film I've finished and can easily recall will be subject to ranking, but they will also have brief reviews here in the blog.

As I finish a new cluster of films, I'll add them to both the blog and the Rankings page. Bear with me, this may be going on for a while. But it should make for at least semi-decent blog fodder.

A Nightmare on Elm Street (1984) - This is a great slasher film, however, it is devoid of the sardonic humor we've come to expect of Freddy Krueger (Robert Englund). He's just a slasher and creep and child killer and that's really about it. Any of the elements of his unique personality for which we developed a disturbed love are non-existent. However, the film does have one of the greatest scream queens ever in Nancy Thompson (Heather Langenkamp) and a fantastic good riddance to Johnny Depp in his first ever film role that I'm sure has Amber Heard drooling.

A Nightmare on Elm Street 2: Freddy's Revenge (1985) - It's weird, I don't remember watching this back in the day, but I must have because all the scenes came flooding back to my head as they played out on screen. The runaway bus, the kid moving into Nancy's old house, the image of Freddy hiding away his glove in the furnace, the "you've got the body, I've got the brains" quote, all of it. Strange how that happens. But, overall, this was a solid follow-up to the original with (mostly) better acting and effects given that it was 1985. But I really enjoyed how Freddy attempted to turn the new kid, Jesse (Mark Patton) into his killing proxy. You could basically re-title this one Puppet Master and it wouldn't be far off the mark. As for Freddy himself, the humor isn't quite there, but his personality is definitely shining through much more than in the original film.

Halloween (1978) - I will admit it's been close to 30 years since I've watched this classic of the genre. The Shape (aka Michael Myers) returns home to Haddonfield, Illinois (ILLINOIS REPRESENT!!) to wreck havoc on the town that had him put away in an asylum 15 years ago after killing his sister. Now it's on! Shockingly devoid of blood or guts, but the sound mix and lack of acting finesse are something that only the cult film fanatics can truly forgive. But it's still so much fun. And even Nathan enjoyed it.

Halloween II (1981) - To paraphrase Roger Ebert, how the mighty have fallen. Set on the very same Halloween evening in 1978, Halloween II shows what happens after Dr. Sam Loomis (Donald Pleasance) saves Laurie Strode (Jamie Lee Curtis) from Michael Myers. And, to be honest, I could have done without. This movie feels so phoned in by all involved. Curtis you could tell was either completely uninterested in the role or overplaying her own shock. And there are so many instances of the audio not syncing up with the video that it pulls you right out of the film. It's really no wonder they skipped over having Michael Myers in the third film entirely.

I've currently got far more movies listed on the Rankings page than are reviewed here. Those will come. I promise. Time to start up some Dream Warriors.

Nov 25
Nathan was watching a how-to video on drawing on YouTube and decided to hunker down with some paper and markers and create a chibi version of his hero Eddie Munson from Stranger Things 4. I’m amazed at how well it... 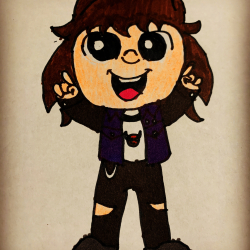 Nov 27
While I’ve always been bothered by those sticker families on cars, nothing bothers me more than when those “families” are ill considered before being applied to a cars rear window. Take, for example, the ones on a minivan driving ahead... 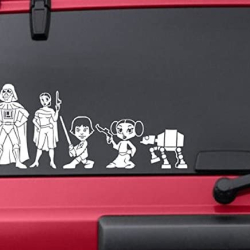