Howsabout a second batch of reviews for Jay-Mike-Fred: A Horror Compendium? I remembered a few others I've seen recently and a couple more A Nightmare on Elm Street films since the last batch of reviews. So here goes...

Happy Death Day (2017) - I wasn't sure what to think when I heard that a horror movie was equal parts 80s slasher and the comedy Groundhog Day. Well, I'm here to tell you that it works. It works so well. Jessica Rothe as Tree is a great addition to the Final Girls and Scream Queens lists. Why don't more slasher films happen on college campuses? Oh wait, I think there are actually quite a few, aren't there?

Trick 'r Treat (2007) - For the longest time, I assumed that Sam, the diminutive kid dressed in a potato sack mask and orange pajamas was supposed to be a stone cold killer in this film. As it turns out, he's more a symbol than a killer (although he does have a few attack scenes). He's symbolic of the end of a character's tale. It's still pretty malevolent, but not what I expected. This movie is a mash up of several stories that happen in a small town that all wind up tying to each other in the end. It's good. Don't get me wrong. Just not at all what I thought it would be going in.

Smile (2022) - When psychologist Rose Cotter witnesses the suicide of a patient right in front of her eyes, she starts a deep dive into the circumstances that may have precipitated it, focusing on the patient's claims that someone smiled at her in a most horrific way and she knew she would die within a specified amount of time as a result. Of course, as soon as Rose starts to investigate, she gets smiled at by another patient and then her grip on reality starts to slip. It's dark, it's twisted, it's pretty well done. Sosie Bacon, the daughter of Kevin Bacon and Kyra Sedgwick, does a really good job as Dr. Cotter. I enjoyed it.

The Thing (1981) - To this day, I will never understand why it took me 41 years to watch this classic of the sci-fi/horror genre, especially given my love of the Alien saga. When a Dutch research helicopter loses control near an American research facility in Antarctica, the team investigates. What they find is the slaughtered, frozen remains of the Dutch team plus a grotesquely twisted, semi-humanoid form that they bring back to their base to autopsy. As it turns out, it's not dead and it doesn't appreciate being cut into. What it does enjoy is taking on the form of its host and replicating its actions and speech patterns so well that others can't tell if what they're interacting with is the live version of their teammate or an infection. Yes, the effects are dated, but they age so well. Everything about this film is classic and its inspiration of future films like Alien vs. Predator is patently obvious. My only issue with the film is how quickly it transitions from scene to scene and how it seemingly assumes a pre-existing knowledge of what's going on because it gives very little explanation. You are just dropped into the story.

Barbarian (2022) - When Tess (Georgina Campbell) goes to Detroit on business, she rents an AirBnB on the wrong side of town for her overnight stays. However, when she gets there, she finds it's already occupied by Keith (Bill Skarsgård), a jazz musician in town researching the local music scene. While things are a little weird the first night, the two wind up bonding and a friendship is developed. But the next night, things take a turn when they discover a hidden door in the basement of the house that leads to all kinds of unknown horrors and then, while investigating, Keith goes missing. This is one of those films that when I first saw the trailer, I said there was no way in hell I would watch it. So what did I do? I watched it anyway. What I knew of the film was really only the first half. The second half was something else altogether.

Freaky (2020) - After watching and loving Happy Death Day, I was totally stoked about this new Blumhouse film that promised to be a cross between a slasher and the body-swap comedy Freaky Friday. Plus it starred Vince Vaughan who I had not seen in a horror film since his role as Norman Bates in the remake of Psycho back in the late 1990s. It was actually a big letdown. The comedy was decent, but the slasher aspect was meh at best.

Dec 8
I usually try to keep my personal and toy photography blogs separate. No real reason why, I just do. But I have to admit that I'm really proud of how this shot I took earlier today turned out so I... 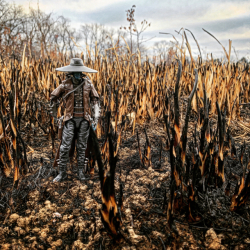 Dec 10
Yeah, I've been watching a little of the World Cup here and there. Although I don't really understand all that much about "World Football," I still enjoy checking it out. But, holy heck, that Morocco-Portugal game today? I was watching... 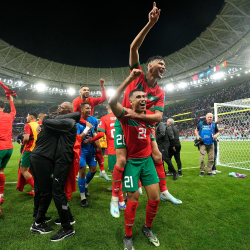